Over the weekend, I participated in a group psychic reading with medium Krista Kaine.  As she read each person in the group, I kept hoping that we would run out of time before she got to me.  She did such a great job asking questions and being the intermediary between this world and those on the "other side of the veil".  I felt that each reading was so intense and intimate for each person.  She called it the hot seat.  And funny thing, I was the last one read and we went way over time.


In retrospect, the group was diverse in who and why they were there.  We had several people who had illnesses, who had lost children and parents and friends.  As I sat there waiting for her to get to me, I thought to myself, "why am I here?"  It was obvious that many of these people needed to be here to get messages from their loved ones.

In one case, a lady had developed breast cancer after her son had tragically died several years ago.  I do believe that our body retains emotional pain if we do not actively participate in the grief and healing and releasing process.  I'm no doctor or healer but it feels like to me that her body retained the pain of her loss in her breast tissue.  I've met this woman on several occasions and she looked pale and fragile when she entered the room.  Early in the session, Krista worked on her.  I thought it was fortuitous that we were at a "new age shop" where there are lots of stones and crystals for Krista to "borrow" as part of the session.
Krista put some large quartz crystals on the floor near this lady.  It was fascinating to watch Krista work on this woman.  She drew from her personal experience of healing her father who had a cancer.  As the afternoon progressed, this woman's face brightened and got more color.....which I thought was amazing on several levels, primarily since Krista kept turning the thermostat down on the air conditioner and I was freezing.   Another observation, the quartz crystals appeared to darken as the reading progressed.....weird.

When I signed up for the reading, I didn't really know much about Krista.  There was 1 seat open and I didn't have anything more interesting to do with my Sunday afternoon, so I thought, "what the heck...do it."  She is a medium and although I think I have worked through much of my personal losses, I would go and be supportive for several of my friends.
When Krista worked on several people's health issues, I was intrigued.  And why, I don't know.  As I think about it a bit harder now....isn't that what the whole process is about.....HEALING....mind, body, and spirit.

I found the two psychics to have a completely different style and 1 is not a substitute for the other.  I am glad that I didn't have the attitude that once I've gone to a psychic medium, I've seen them all.  And it makes sense to me as I have learned more.  Each person is a product of their unique experiences and each has what I call a "filter system" that is unique.  So it makes sense that each psychic medium would have a personal style and a different filter system....and the same goes with the person being read.  In my case if a meduim would talk about the song, Somewhere Out There,  1 person may thing about a small lost mouse or child where I would think of my Mother.


Back to me sitting there, hoping for time to run out.  I had spoken out load earlier that morning to my deceased Mother which I do a lot now after several readings with Robert Baca, Voices From Heaven; http://www.voicesfromheaven.com/
Talking to my Mother now is a lot like talking to my husband and soul mate of 37 years, I know or think or hear in my head what he is going to say before he says it....and so it's the same for my Mother.  A while back I wrote about her communicating with me with "our song"....Somewhere Out There (see August 2013).  I know she is out there, thinking of me and loving me.


As I sat there, in my head I thought I don't really need to hear from my Mother, I would really like something useful to take away from this reading.  I don't need to deal with issues from my past or present, I want something tangible to help me in the future.  And crazy thing....that's what I got.  I should write more....this reinforces this blog actually.  I will write more about it as soon as I get the recorded session, so that I have what actually happened versus my memory of it.

My closing thought is that Krista Kaine is more of a Large medium.  ;)

I have copied a piece that was written about Krista when she appeared at my spiritual community meeting earlier this year....that I missed.


You won’t want to miss this one!  We are so very excited to have Dr. Rev. Krista Kane, a nationally-known Author and Psychic Medium, whose work takes her throughout the country. Krista is also a Metaphysical Teacher and Public Speaker, as well as an Ordained Minister and Life Coach who works with her clients in the capacity of Personal Empowerment & Development, and Relationship Coaching/Counseling, all from a spiritual perspective.  Krista’s presentation will delve into her new book:

Standing between the Worlds

Have you ever wondered what happens when we die? Do you believe in the afterlife, in heaven or hell? Have you ever wondered about the validity of a medium contacting those on the “Other Side”? Does your childhood religion prevent you from finding Truth in the answers you seek? Then you are not alone. These are questions that have plagued the mind of millions throughout history. In Standing between the Worlds, Author, Minister and Medium Krista Kaine will explore life, death and the afterlife in an easy-to-read, no-holds-barred communication that will answer many of these questions . . . and more.
Additionally, Krista shares with you the play-by-play intimate communications between her clients and their loved ones on the Other Side. Some of the readings will make you laugh, some will make you cry, but they will ALL make you a believer! 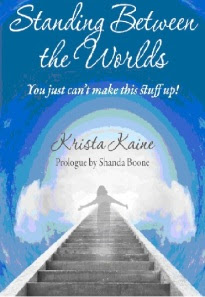 Whether it be through her writings, her one-on-one sessions, or her various seminars and workshops, Krista’s work is founded in a concept she calls, “Healing the Emotional Heart,” which is the undeniably transformational process of letting go of deep, emotional wounds and releasing their hold on your life. Krista combines her coaching expertise and tried-and-true strategies with her God-given gifts to help foster a Human/Spiritual balance, bringing her clients into a higher state of awareness of Wholeness and Oneness, which she says is “the inherent mission of the soul.”
Krista was an instructor at a metaphysical college, while simultaneously attending as a student to earn her Ministerial Degree, which came coupled with an Honorary Doctorate. When asked why she went the route of “Minister” in a radio interview in 2011, Krista explained: “Because of the religious confines, constrictions and negative connotations that I grew up with (being raised in a strict Evangelical Christian Church), I had to find a way to prove, ‘Hey, this isn’t dark or evil or ugly. It’s a gift! It’s the same gift possessed by Jesus – the same gift spoken of in the scripture that the church uses to stifle me and others like me.’”
Krista took her work out of the confines of her local area in 2011 and she now works throughout the U.S., with goals for working abroad. Whether traveling the country or working right in her hometown in Southwest Florida, Krista teaches and works from her extensive knowledge of metaphysics, referring to it as “all branches of the same tree, whose body is rooted in spirituality.” In a newspaper interview in 2010, Krista said, “I love all of it; emotional or physical healing, workshops and classes – particularly the Law of Attraction, coaching and the whole gamut. But my favorite part – the part where I know that I am serving in the most amazing capacity – is mediumship. I could never emphasize enough how incredible it feels to connect someone to their loved ones who have passed and to help them to speak and hear the words they thought were forever lost. There is no greater healing than that!”
Although she was born a “sensitive,” Krista worked (and continues to work) diligently to fine-tune and amplify her psychic and mediumistic gifts. She has trained with some of the greatest metaphysicians in the world. Krista’s mediumistic abilities have been compared to that of Lisa Williams, John Holland and Teresa Caputo.
In January of 2014, Krista released her third book, “Standing between the Worlds – You just can’t make this stuff up,” a book that explains life, death and the afterlife in great detail, while using common, every day, simplistic terminology and comparisons, coupled with her quick wit and bubbly sense of humor. “Standing between the Worlds” has now been accepted into the mainstream market, through support by Books-A-Million.
Posted by SkyQueen at 9:58 AM